Hopefully, the Midwest has seen the last of snow and cold weather. The temperatures are rising steadily and the change of Spring is taking hold.
Not much to tell this month. Rusty Wessel tells me that the reprinting of the original BB’s is moving along nicely.

The BOT will soon be restored. More on that next month. Also, I hope to have reports from many of the committee heads for you.

The ACA Convention is fast approaching. If you are planning to go, please make your reservations soon. It is always a great time. I know where the 2016 convention will probably be but you will have to wait until the announcement at this year’s convention to find out where. After all, it is not official yet.

There is no April Chair letter so without further ado I’ll get on with the rest of the newsletter. 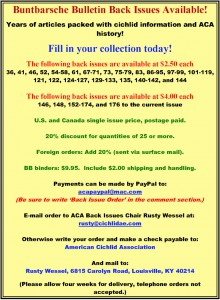 When you are 11 years old, a 130 gallon tank seems like an ocean. I remember looking into it with awe and planning what my next step would be. At 11, the best I could come up with was yellow and black gravel, some turned over flower pots and T.H.E. Rock as I and my brother called it. This rock weighed about 15 lbs. but when you are young, it may have well been a boulder. I needed both hands to place it into the tank and was afraid of dropping it and breaking the front glass. However, it became the focal point of the tank for many, many years. In fact, I think I still have it in a bucket somewhere.

A big tank meant two things to me. First, pride. Man, oh, man! I had the biggest tank of any of my friends. Secondly, it meant that I had a playground to experiment with and that’s exactly what I did. My first set up contained two pairs of Convicts and two pairs of Rainbow cichlids. I sat and watched the enormous amount of interaction for hours on end. I can honestly say, at this point in time, that I learned more about cichlid behavior with that tank and those fish than I ever would’ve with any other set up. Outstanding!

Another thing happened, as well. I believe that my pink Congo’s produced the first Calico Convict ever. This was 1966-67 and as far as I know, this mutation was unheard of. The calico fish was a male and he was beautiful but after a number of years of breeding him and his parents, I never got another. Now, remember, I was just a kid. I knew nothing of genetics and back crosses, etc., so I did the next best thing. I heard of this guy, Dr. Robert J. Goldstein, and I wrote him a letter at Emory University and told him what I had. And, much to my surprise, he answered a kid, like me, with a wonderful letter that I still have buried in some box somewhere, probably under T.H.E. Rock! Having no luck breeding it, I pickled the male calico and I sent it to Dr. Goldstein. For all I know, he still has it in a jar somewhere.

The 130 became a wonderful laboratory for me. When the Malawi craze began, I purchased some of the first Melanochromis auratus (then Pseudotropheus) and Metraclima zebra (then Pseudotropheus, as well) to come into the Chicago area. I paid a small fortune for them, about $40 a pair and my Dad thought I was nuts but since I was spending my own money to buy them, I had a paper route, he couldn’t say no. I bred those fish and marveled at the colors of the female auratus and the young which were small exact copies of her. And it is hard to challenge the beauty of a male BB zebra fully colored up in his whitish blue and dark barred dress. That summer alone, I made about $800 on the fry and this was back in 1968 or so. That was big bucks to a young kid, let me tell you. Dad gave me credit for taking the risk and making good on my investment. His kid did good. Dad would later question my sanity on many other occasions but always found, that while I approached things differently, I was usually successful. But that’s another story.

After Malawi fishes came Tanganyikans and Victorians. As a newlywed, the 130 was filled with RO water and I bred Discus in it as my new bride loved those fish. I raised angelfish of monstrous proportions in the 130, too. It was my go to tank for any endeavor that needed more room than a 30 gallon tank could provide. Tropheus, Frontosa, danios by the 100’s, big mollies and swords. You name it, the 130 did it for me.

Currently, the tank is in storage. But when I can, I will reseal it and bring it back to its full glory. My wife and I need to downsize as empty nesters so the tank will have to wait. But when it’s back up and running, it’ll get a prize colony of something to call it home.