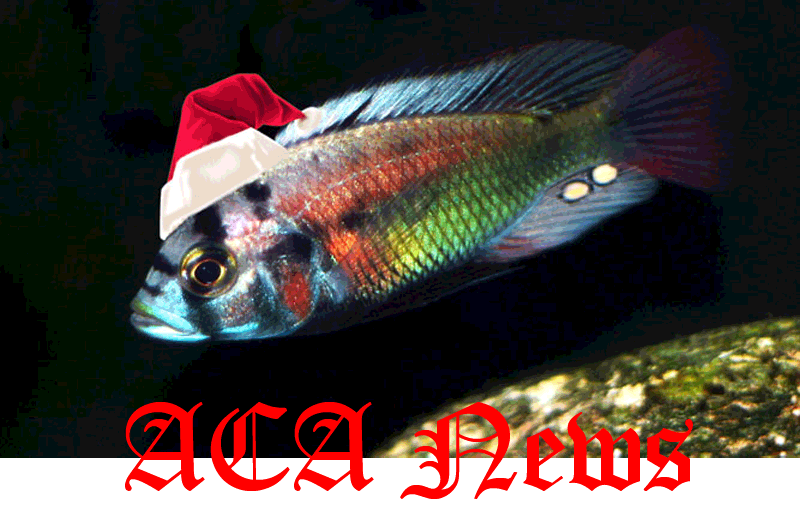 Merry Christmas from the unusually balmy MidWest. I’m writing this in mid-December, 12/15/21, and it is 16°C (62°F) instead of the historical average of about 0°C (32°F). Great flu weather for being in a pandemic, don’tcha think? It also makes for unstable weather conditions and our thoughts and prayers go out to those affected by the rash of tornadoes that hit southern IL and KY. Terrible devastation occurred for far too many people.

But, on to all things cichlid … 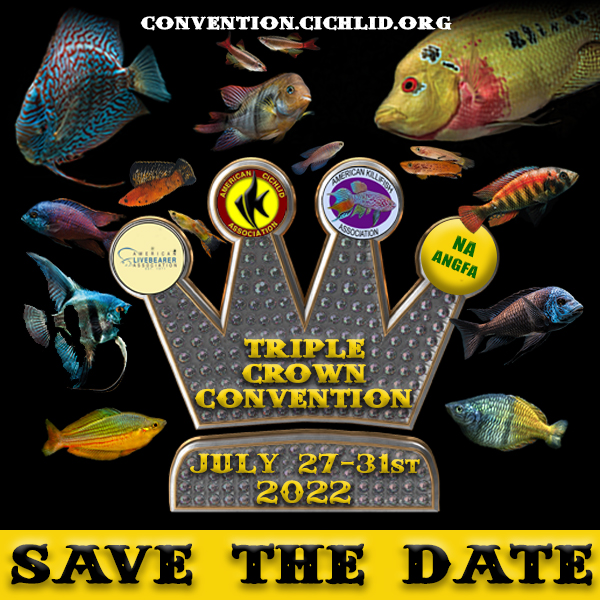 The hotel has already extended into the second block of rooms for the convention. At this early date, that is unheard of. Rooms are going like hotcakes. Remember, this convention is the grouping of four organizations, not just the ACA. Cichlids, Killies, Livebearers and dither fish, er, I mean, Rainbow Fish will be combined under one roof. Make your reservations NOW if you want to stay at the same hotel as the event.

Registrations as of a few weeks ago were also unprecedented. There were already 90+ registrations for the ACA alone.

Also, the events are filling up and could even be full by now. Make your reservations today!

(with apologies to JRR Tolkein)

I was at the GCCA swap meet this past weekend, 650 fish folks came out to the 4-5-hour swap, while visiting, I glanced up to see an old friend. The last I heard of him was over 30 years ago, maybe even longer. You see, when he was getting married, his soon-to-be-wife said “The fish go, or I go!” and he chose to give up his fish. Yes, yes, I know the usual jokes that come to mind when you hear ultimatums like this, but he chose to be with the love of his life instead of his fish. I can respect that. But recently, sadly, his wife passed away. What did he do? He came back to the hobby, of course. There is nothing like the friendship and camaraderie that you build in this hobby. Friends that are never forgotten.

When I first saw him, I remembered his first name, then his last and the fish he raised that took ACA Best of Show many moons ago. We reminisced about the old crew and told him my name to jog his memory. He looked at me and said “Remove the mask” (Illinois is still in that stage). I did and he began to smile as he recognized me from all those years ago. He pumped my arm with a huge handshake as we reacquainted ourselves. We talked a while and I knew that I’d be seeing him again at a future cichlid event. Some things may be postponed but never really change. 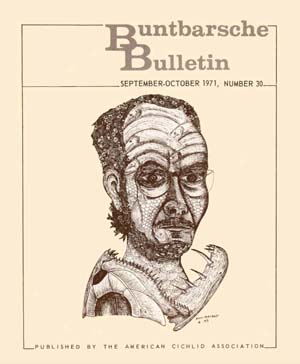 The first issue of Buntbarsche Bulletin that arrived at my doorstep was BB30, in the Fall of 1971. I chose to wait until this December to celebrate my anniversary date because, to be honest, I do not know exactly what month I joined. I do, however, know that the artwork of Dr Jaques Gery was the first impression that I had of the organization. When BB30 arrived I probably thought it was a bit odd at first glance but then I dove in under the cover and was delighted with what I read. As a 16-year-old kid, it was pure Cichlid Heaven!

During the past 50 years I have done quite a bit for the ACA including being the GCCA Publicity Chair for their first hosting of an ACA Convention in 1990, four terms on the BOT, one year as ACA Chair, Election Co-Chair with Daryl Hutchins and Editor of ACA News for the past seven years. I have also been one of the most prolific writers in the ACA’s history. During the next year, I will continue to write the ACA News but I will also be working on fund-raising for the ACA and Publicity for the Triple Crown Convention. If you are not aware of what that entails, let me tell you, I have my work cut out for me.

But why do I do it? Why do I continue to contribute my time, effort and skills to the ACA? If I have to give you an answer in one word, it would be “accomplishment”. I enjoy seeing the ACA succeed. Sure, the ACA has taken its lumps but it has always bounced back. Did you know that the ACA was once an organization of over 2,500 members? That’s a much larger membership than we have today. Why did the membership fall? For one thing, the internet came along and people thought that they could get all of their cichlid needs on-line. A while back, ACA also had a few years of poor leadership with virtually no services, besides a convention, being provided. But, at the first Aquatic Experience held in Chicago, almost eight years ago, Rusty Wessel and I talked about the ACA and how to turn things around. Here we are now: a new, vibrant ACA that, thanks to Daryl Hutchins has an on-time Buntbarsche Bulletin and the slickly published ACA News, written by yours truly, the Cichlid Room Companion and much, much, more.

Speaking of the ACA News, it was created to be a way for the ACA to keep in contact with its members, something that was sorely lacking before. I hope that it is fulfilling that role. Over the past seven years, I have heard very little feedback from members about it. I remember one guy telling me that he loved reading it every month while we rode the elevator at a convention. That was very nice to hear but other feedback has been skimpy. But, over its seven years I have only heard four complaints; not too bad if you ask me. I hope that you are enjoying my writings as much as I enjoy sending them to you.

Before the recent election, I had one member tell me that we NEED so and so to run for the BOT; that the organization NEEDS this one person. If he didn’t run, and win, all manner of calamities would occur. Contrary to this guy’s belief, the ACA is not one person, but many, all trying to do the best they can with the time available to them. Nothing hinges upon just one of us. Some take on large roles, others small, but combined, we volunteers get the job done to the best of our abilities. And, when one of us falters, there always seems to be someone else willing to step up to the plate and take on the responsibilities. To all of my fellow cadre members, thank you for all you do. We, as a team, get the job done. What about you? Have you ever thought about reaching out to the ACA to help out? Just drop one of the cadre a note and we will be glad to steer you in the right direction.

That includes writing articles for BB. The ACA even pays you for them. Don’t be shy, put pen to paper or finger to keyboard (chisel to stone tablet … whatever – BB Ed) and write an article. It can be as simple as a BAP report or a fishroom tip. It does not need to be a long-winded scientific article, although those are more than welcome, too. Short articles are an Editor’s dream (Hallelujah! – BB Ed). Contact Daryl Hutchins, our BB Editor, for more information.

Do you have a friend or loved-one who needs to get more involved in the cichlid hobby? Get them a gift membership to the ACA. It’s easy to do. Just visit cichlid.org, cursor over to the Store and drop down to Join the ACA! Treat yourself to a Life Membership in the drop-down menu, too. That way, you’ll never miss any ACA info, ever.

NB: Don’t forget to make your plans for the ACA Convention 2022, The Aquatic Triple Crown.

We wish you all a Merry Christmas and a Safe, Prosperous and Happy New Year!

Send your cichlid-related news/events to the AN Editor at [email protected] and we will be happy to help you spread the word about your local events. Please allow six weeks lead-time.

Please ensure that the ACA has your current e-mail address. Otherwise we could lose touch … e-mails not arriving, fire and brimstone coming down from the skies, rivers and seas boiling, 40 years of darkness, earthquakes, volcanoes, dead rising from the grave, human sacrifice, dogs and cats living together – mass hysteria! Oh, wait …

Your street address and/or mobile/phone number could prove useful too … just in case.